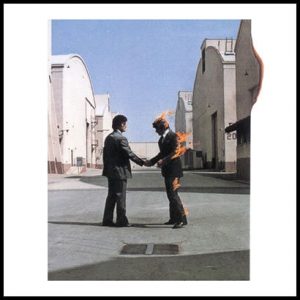 I loved learning this solo. It’s such a classic song, that everyone knows, and it’s hard enough that I feel like I’ve really accomplished something. Because this solo has a harmony part, I recorded it twice and have included both parts through the magic of “picture in picture”, which thankfully iMovie makes ridiculously easy.

I think I got pretty close to Tom Sholz signature “Boston Sound” using the Ampkit+ app on my iPad. It really makes practicing and recording these solos a breeze. Let me know how it sounds. I’ll be announcing solo #7 in the next few days.

Just a quick post to let you know what I’ve been up to. I’ll try not to go more than a week between posts again.

Since my last progress report, I’ve been practicing as much as I can, but some days I’ve missed practice due to a work deadline. I also had to borrow a guitar (thanks George) since I broke one of the machine heads on my Gibson. I’ve ordered replacement Grovers, but they haven’t come in yet.

I’m pretty much ready to record “More Than a Feeling” but I want to wait until I get the new machine head installed before recording it. So look for that in a couple of days. Thanks for hanging in there and following along.

I’ve been working on this solo for about four days, and I’m loving it. This is why I started this project!

Here’s an audio mix of where I am on the solo currently. It’s in pretty good shape, but I really need to get it cleaner and more polished. This also shows how I am able to record the harmony parts and mix the solo together so that it sounds closer to what’s on the album.

I’m not sure what I’m going to do when I record the video — I guess I could split screen it if I can figure out how to do that in iMovie, but either way I think it’s going to turn out very nice. Take a listen:

This project just got a whole lot easier.

I have always been a huge iPhone fan, and I’ve had an iPad for a few months now, so I’m always looking for new useful apps. I found one last week that is an utterly indispensable tool for guitarists. It’s made learning and recording these solos much, much easier. 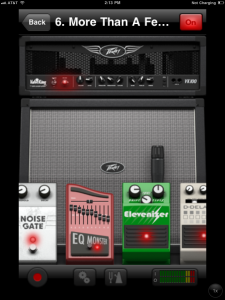 The program is called AmpKit and it’s made by AgilePartners, the developers who created Guitar Toolkit, which I’ve had for a couple of years. It’s an amp and effects simulator that models real-world amplifiers, effects pedals, speaker cabinets and microphones, giving you a wide range of latitude in creating different guitar sounds, from simple and clean to raunchy and hard. I’ve only been playing with it for a short time, but it’s already made a huge difference in how I approach my practice.

In addition to the amp simulation, it has full recording capabilities, and I can upload audio files as backing tracks that I can play over. When I record a track, I can tweak the amp settings as much as I want after I’ve recorded it (it keeps the dry guitar signal). When I have the recording exactly how I want it, I can pull the file off via a web browser or upload it to SoundCloud. Then I can mix it in Audacity with the backing track (which synchronizes perfectly) and drop the mixed audio into iMovie to get a much better sound than I’d been getting with my camera’s crappy mic.

You can see the results on my last performance of Take It on the Run.

I purchased the AmpKit LiNK adapter ($29.99 from Amazon) that allows me to plug my guitar directly into my iPad and connect a headphone or external amplifier to monitor the output. I like to stand my iPad up in the dock connector and use the dock’s audio out to run to my amp or headphones. It’s a sweet setup that makes me much more efficient while practicing and recording.

They are supposedly coming out with a universal app that’s built for iPad in addition to the iPhone, and I can’t wait to see how they use the additional screen real-estate. The iPhone version looks a bit pixellated and cramped on the iPad. I hope they also consider adding the ability to share set-ups between users and moving pedals and amps between different installations of the program (ie, on my iPhone).

Gary Richrath, REO’s lead guitarist, is the king of string bending. The hardest part for me in this solo was getting the bends to the proper pitch, plus the very difficult 2 step bend at the very end of the solo, which was necessary because my guitar only has 22 frets, and Gary’s has 24.

I’ve very pleased with the pace that I’m learning these solos. It’s a side-effect of practicing every day — it’s accelerating for each solo, even though they are getting more difficult. Originally, when I planned this project, I gave myself an average of 1 month per solo, which would have taken me a little over 2 years for the whole project. I think it’s going to go faster, and that’s exciting to me.