Bear with me through this lengthy story. This song brings a strong memory to me every time I hear it, but it takes a while to tell.

In the summer of 1982, when I turned 15 and had just gotten my learner’s permit, I experienced one of the central adventures of my youth. It was well known to the boys of San Marcos High School that every summer, Texas high schools would send their top drill team girls to Southwest Texas State University (now simply Texas State) to participate in Drill Team Camp.

The girls were holed up in Falls Hall a featureless dormitory facing University Drive, one of San Marcos’ busiest thoroughfares. One afternoon, two friends and I drove down and “chatted up” some of the young women as they poked their heads out of the dorm windows. My friend Hunter was a pretty smooth operator and persuaded a couple of the dancers to sneak out with us later that night. All we had to do was figure out how to get them out without their chaperone knowing. We talked about it and decided we would bring a ladder so they could climb out of their second-floor window. 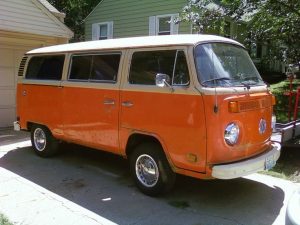 I seriously thought they were joking, but I snuck out at 11pm that night and drove down to the dorm with an aluminum extension ladder crammed into my parent’s 1979 VW Bus. My other friend Bob decided it was too risky and declined, but Hunter was gung-ho and the girls were true to their word. We propped the ladder up against the side of the dorm in full view of the entire town and they climbed out of the window.

We drove out to 5-Mile Dam, a secluded swimming hole on the Blanco River. It was dark and we were the only ones there. Hunter took one of the girls off into the woods to do who knows what (ok, I think I know), leaving me in the van with the other drill team majorette, whose name I don’t remember, but I think might have been Beth.

I slipped my favorite mix tape into the casette player and we talked. And talked. And talked some more.  I knew that I should make a move, but I couldn’t work up the guts. Then “Lights” by Journey came on the stereo, and I knew this was my chance. It was the perfect moment. I swiveled in the driver’s seat and looked at her. Her young, pretty face was lit up by the radio’s light.

“Yes?” she replied, looking at me expectantly.

“Um, sure…” she said. I imagine she sounded disappointed, but who knows?

And that was it. The moment passed. Hunter and his girl emerged from the trees and we drove back to the university. When we got back to the dorm, the girls invited us into their room, which they shared with two other dancers. Of course, we wanted to go, but didn’t like the idea of leaving the ladder propped up against the side of the building for anyone to see. So we climbed into their room and pulled the ladder up through the window after us. We sat on their beds talking, with my Dad’s extension ladder stretched out on the floor, until 5 am.

I had another adventure trying to sneak back into my parent’s house at 6 am, but that’s another story and I’ve already written too much. It’s probably for the best that nothing unwholesome happened with Beth, but I’ll always think of “Lights” as a reminder of missed opportunities in the midst of boyhood adventure.

Journey’s guitarist, Neal Schon, was and is an amazing inspiration to me — both before I became a guitarist and since. As much as Steve Perry’s voice, the guitar work on Journey songs is essential to creating their signature sound — Schon’s playing is always distinctive and technically brilliant. Lights is certainly not the most difficult Journey solo I could have chosen, but the meaning the song holds for me won out over my desire for a challenge. There are certainly some difficult parts, but I think I will get it down fairly quickly.

Although Neil played a Gibson Les Paul during the time that Lights was recorded, he went on to design and sell his own line of guitars, one of which is shown below.

Backing Track: http://www.guitarbackingtrack.com/play/journey/lights.htm (Not great, but the best I could find)

Sometimes the best way to improve something is to not practice it. I’ve know about this phenomenon since I was a gangly 14-year-old kid who used to go to the arcade every day and try to set the high score on the Tempest machine. I would get slowly and steadily better at it, but it was only after I went on a week’s vacation and came back to machine after a break that I bested my high score, and by a substantial margin. The brain needs some time to process skills.

Last week, I spent 4 days away from my guitar (not by choice, just due to circumstance), and when I came back to it this past weekend, I had improved my ability on this solo, so much so that I felt comfortable recording it today.

David Gilmour’s style is something I don’t think I could ever fully match, but let me know if you think I came close.

I know it’s been a while since I posted, and the truth is I’ve been heads down learning this solo. I feel really good about where I am, and I recorded this video in the anticipation of it being the final performance video, but I’m not quite there yet.

The issue is that David Gilmour is a frustratingly precise guitarist. His timing is really hard to match, and with the clean sound of the guitar, any mistake is glaringly obvious. While there aren’t too many mistakes in this performance, there are enough that I’m not satisfied with it. I’m going to work on it for another week and see where I am.

Thanks again to George Coller for the Strat loaner. I think it sounds awesome on this song.