Here is my performance of Solo #1, Queen’s We Will Rock You.

I have said before that my criteria for “completing” a solo is whether I would feel comfortable playing the solo live in front of an audience, and I feel I’ve satisfied that requirement. I’m never going to be able to play it as well as Brian May, but that was never my goal.

Here are a few thoughts about my experience:

While I go through the daily grind of repetition to try to make this solo performance-quality, I thought I’d write a bit about my recent rediscovery of the joy of vinyl albums. I dug up my old box of records recently, pulling it down from a shelf in the garage and putting it in my small practice area. I bought a Crosley turntable with speakers so I could listen to them as inspiration for my project. Many of the albums feature the solos I’m trying to learn.

There have been countless arguments about the sound quality of analog vinyl records vs. the pristine digital sound of online music or CDs. The truth is, it doesn’t matter which one ekes out a victory among the audiophiles. Vinyl wins because of the experience. The tactile, visual and auditory experience that only a record can provide.

Apple made an attempt to resurrect the experience with their iTunes “LP Format” for digital downloads–certain albums have artwork, photography, video and animation to enhance the experience–and I applaud them for it. At the bare minimum they’ve brought album art back to music, and that’s a huge victory. But listening to a record is so much more than looking at a picture while you listen to the music. There’s a heft and size to an album. It’s big and beautiful. A lot of them have fold-out insides with big paintings and photos. Lyrics or liner notes are printed on the sleeve. Physically placing it on the turntable and moving the needle to the proper spot takes time and effort. There’s even a meaty smell to a well-used album that exists nowhere else.

For reasons I can’t describe, this makes the music sound better. I listened to the whole first side of AC/DC’s Back in Black the other night and it brought back so many good memories. Holding the liner notes while the songs played is a rare treat that I hope others will explore. If you haven’t listened to a good record in a while, maybe it’s time to dig out and dust off those old albums and remember what it really feels like to experience music. And if you never have experienced the allure of vinyl, what are you waiting for?

I’ve been working on the We Will Rock You solo for about 2 weeks and put in probably 10 hours of practice on it. Here’s a video showing where I am. Obviously there are some timing issues and sloppiness, but all in all, I’m pretty pleased.

I’m playing this with a backing track that does not have any guitar, so everything you hear is me. Let me know if you think the sound of the guitar is pretty close, and if the format of the recording works. The mic on the video camera is picking up a lot of the sound of the strings which doesn’t sound great. I’m going to see if I can run directly from my amp to the video camera and bypass the mic.

You’ll have to click through to watch the video — apparently enough of the original song is in the background that YouTube won’t embed it. 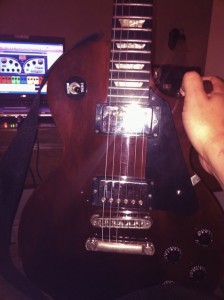