I love solos that use the whole neck of the guitar. That’s one of the reasons I liked learning Shine On You Crazy Diamond so much. Welcome to the Jungle is great in that regard, especially for such a short solo. It really makes good use of all the real estate. It’s also a lot of fun to play and harder to get right than it seemed when I first started learning it. I think it turned out well.

PS: If I look a little mad in the video, it’s because in earlier takes I kept missing notes at the end, and the takes were otherwise perfect until the very end — I was getting really frustrated with myself. I didn’t even have the energy to smile when I finally did nail it. Oh well.

Before I get into what this song and solo mean to me, let me say I’m glad to be back. I knew a big project like this, that’s likely to go on for a few years, was bound to have some long periods of inactivity. I didn’t expect this break to last a year, but here we are. I don’t have any good explanation for why I stopped practicing. Partly it was the distractions of family and work commitments, and partly it was just good old fashioned burnout. And once I had let it go for a while, it was hard to get back into the groove. But here I am. I’ve been practicing steadily for a couple of weeks, relearning some of the old solos, growing back my callouses, and getting ready to tackle Slash. 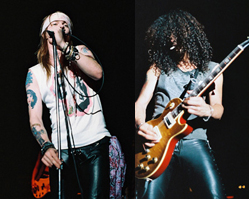 Like most of the guys my age I first heard Welcome to the Jungle via the video on MTV (which you can watch here). I had been out of high school for a while, flunked out of a semester of college at UT and was working the night shift at the IRS. The music video was on heavy rotation in 1987 and although I didn’t know why I liked it so much at the time, I realize now that it was because Guns N’ Roses killed the ’80s hair band. They kind of looked like Poison and Cinderella, but their music was edgy, raw and complex, without the forced “bad boy” image of bands like Mötley Crüe and Ratt.

They really were bad boys. They shot heroin and drank Jack Daniels straight from the bottle. People rioted and threw beer bottles at the stage during their concerts. They put a half-naked woman who had been raped by a robot on their debut album cover. And their music was fucking good.

Their songs were well-produced, but not over-produced. They were all great musicians, but the songs had a feeling like they were always about to come off the rails. They were indulgent and authentic at the same time. And a big reason for that was the amazing solo work of Slash.

I have to admit, I’m a little scared of taking on a Slash solo. Not only is he an amazing guitarist with incredible skill and a very distinctive style, his solo work is just super, super clean. It’s going to take a lot of practice to match the clean notes with the deceptively simple-sounding, but actually pretty difficult riffs.

Here’s the Les Paul Goldtop that Slash played in the early years. It’s a beautiful guitar with a tone that is very full and rich. I’m lucky enough to have a Les Paul from around that time (1989) and I’m hopeful I can get a similar sound.